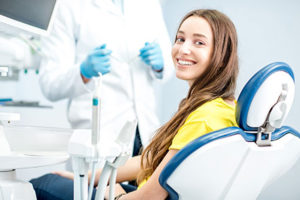 Getting ready to begin orthodontic treatment can bring up a whole host of questions. Will it hurt? How long will it take? What treatment is the best? As your Jacksonville orthodontist, we’ll be able to answer any of the questions that you may have about your upcoming or ongoing treatment process. Our staff is dedicated to making you feel comfortable throughout your treatment, but we understand that you may be nervous about getting started.

END_OF_DOCUMENT_TOKEN_TO_BE_REPLACED

As your resource for orthodontics in Jacksonville, our entire staff is dedicated to bringing our patients the highest standard of care and smiles that impress! Straight smiles are healthy smiles, but they also help to boost confidence and project friendliness. The team at Ortega Orthodontics works to combine our ever-evolving knowledge and experience with our compassion for crafting dream smiles to create the best patient experience possible. Your stunning, confident smile starts with our highly qualified and caring orthodontist, Dr. Holland.

END_OF_DOCUMENT_TOKEN_TO_BE_REPLACED

What to Expect at Your First Visit

If it’s time for you to begin orthodontic treatment, you may be nervous about the process and road ahead. As your Jacksonville orthodontist, we want you to rest easy knowing that orthodontics is one of the best investments you can make for the overall dental and wellbeing of you or your children. To get started at the time of your initial visit, please provide the following information:

If you don’t have a panoramic radiograph from your general dentist, our office will take one to be thoroughly reviewed to determine your best course of treatment. If orthodontic treatment is recommended, one of our staff members will discuss our flexible payment options, fees, and appointment schedules with you to get started. After your initial exam, a complete diagnostic record will be compiled to include photographs of your face and teeth, necessary x-rays, impressions or an iTero scan, and bite registrations. You can complete your diagnostics during your initial exam if you choose.

After your diagnostic records have been compiled and analyzed, you’ll meet for your consultation with the orthodontist. Here you will be able to discuss treatment options designed specifically for your case and ask any questions you may have about your orthodontic treatment plan.

Beginning your orthodontic treatment and your road to a healthier and more confident smile doesn’t need to be complicated. At Ortega Orthodontics, we’re here to help you along every step of the way. Give us a call to schedule your first appointment today!

It’s All About Options

When you’re deciding which orthodontic treatment to pursue for straight and a healthy smile, it should be a great relief to know that there are many options. Each treatment option has it’s own pros and cons. Take a look at this breif breakdown to decide which treatment best suits you and your lifestyle.

Traditional Braces – are the most noticeable braces. They’re made of metal brackets and wires. They are extremely affordable and obviously very effective as they’ve been around for so long.

Invisalign – is the most modern approach to straightening teeth. They’re plastic trays that are customized to your teeth. They gradually move your teeth where they need to be. Every two weeks you switch them out and your treatment continues right along. You can remove these to eat and they’re virtually invisible.

Lingual Braces – are the least visible option available because they’re placed behind your teeth. They are just as effective as traditional braces but nobody will ever know you’re going through treatment.

When choosing your orthodontic treatment, it’s important to know your options. At Ortega Orthodontics we know having many is important, and if you have any questions about what we think the best treatment option based on your circumstances would be, give us a call today.

The Origins of Orthodontia

You know that braces straighten teeth, correct bites and help align the jaw but did you know that the science of orthodontia dates back to Hippocrates? That’s right there’s a history behind those brackets and wires. If you really want to appreciate your treatment plan, check out this – very – brief history of orthodontia.

Ancient Times — Aulus Corneilus Celsus recorded the first treatment of crooked teeth by, “finger pressure.” Remains of Ancient Romans have been found, teeth bound with gold wire. Some mummies have even been discovered with metal bands wrapped around their teeth. Historians believe they closed tooth gaps with a cord made of animal intestines.

18th Century – Pierre Fauchard, a French dentist, is credited with inventing orthodontia in his book, “The Surgeon Dentist.” His device was an iron arch called a, “Bandeau,” essentially an early palate expander. His successor, Louis Bourdet, perfected the, “Bandeau,” and began extracting teeth to assuage crowding.

19th Century – in 1819 Orthodontia became a science with the dawn of the wire crib. Several dentists began creating instruments that, in effect, laid the groundwork for modern braces. In 1843 gum elastics came on the scene and followed up by rubber bands in 1850. And, finally in 1880 a dentist named J.N. Farrar was the first orthodontist to suggest that using mild force over a period of time was the best way to correct crooked teeth.

20th Century – In 1901, the first school of orthodontics and the American Society of Orthodontia were founded. And, classification systems for the crookedness of teeth were put into place. The practice took off from there, and allowed for orthodontia to become a bon a fide science.

Today –Patients can choose from traditional, clear, and lingual braces. You don’t even need metal to straighten your smile or correct bite thanks to Invisalign. And, as technology advances the possibilities of orthodontics are limitless.

Orthodontia has sure come a long way from, “Finger pressure,” “Bandeaus” and animal intestines holding teeth together. It makes us all grateful we’ve got choices and Tylenol.

At Ortega Orthodontics we’re proud to have not one, but two experienced orthodontists under our roof. When we heard that recent research revealed that less than 6% of consumers either don’t know or don’t see the difference between orthodontists and dentists, we knew that we had to set things straight here on our blog.

In order to become orthodontists, both Dr. Holland and Dr. Schellhase first needed to become dentists. Only after becoming a general dentist can a doctor go on to become an orthodontist. General dentists check your general oral health, fix your cavities, and clean your teeth. Becoming an orthodontist requires additional education, making orthodontists specialists in both aligning jaws and straightening teeth.

Still have questions about the difference between a dentist and an orthodontist? Don’t hesitate to schedule a consultation here at your Jacksonville orthodontist office and find the answers you’re looking for! We look forward to giving you answers you can smile about!

As you likely already know, today is April 15th – tax day. For many, tax time is an opportunity to formulate a game plan for financial health for the next year. Have you considered using a tax refund to help fund your oral health? The team at Ortega Orthodontics can help! Whether you are counting on a tax refund check or not, many families here in Jacksonville, Florida have contemplated orthodontic treatment for themselves or a member of their family and now is the perfect time to take action.

Orthodontic treatment can take a variety of forms – including traditional braces, clear (ceramic) brackets, Invisalign, and more. Treatment lengths and options vary based upon the unique needs and goals of the patient, and the doctors here at Ortega are available to help assess your particular needs and draw up a plan tailor-made for you!

While orthodontic treatment is an investment, the dividends include a straighter smile, improved oral health, and less stress on your bite. So don’t delay and make an appointment for a consultation today. By tax time next year, you could be well on your way to experiencing the most rewarding return of all– a whole new smile!

Spring Into Your New Smile

Spring is officially in full bloom here in Jacksonville, and at Ortega Orthodontics we couldn’t be more excited to see what the new season will bring! If you’ve been considering seeking orthodontic treatment, there’s no better time than now!

Are you ready for a fresh beginning? When you choose to improve your smile through braces, that’s exactly what you’ll get! Achieving a straighter smile will boost your self-confidence, impacting just about every part of your life. So if you’re committed to giving your smile the fresh start that it deserves, were committed to giving it to you! Don’t waste another moment considering orthodontic treatment; Dr. Holland and Dr. Schellhase are ready to give you the smile you’ve been waiting for!

Remember, the sooner you decide to get your braces on, the sooner they will be off and you will be rocking a beautiful new smile! If you’re ready to improve the aesthetics and health of your smile this season, look no further than Ortega Orthodontics. We look forward to seeing you this spring!

Retain Your Retainer for Years to Come!

At Ortega Orthodontics we love to share in the experience when our patients get their braces off and see the smile they’ve always wanted. While braces are a major component of orthodontics, they’re certainly not the only component. When it comes to your smile, your retainer is your best friend.

After your braces are removed, your orthodontist in Jacksonville will fabricate a retainer for you to wear for as long as possible. When cared for, these appliances can last you for a lifetime, ensuring a long lasting smile. Your retainer should be properly stored in its case at all times when not in your mouth. Keep the retainer in a safe location, hidden away from pets and children. Wearing your retainer more often actually protects it from these everyday threats.

As your Jacksonville orthodontist we are exceedingly proud to serve our Jacksonville community on a daily basis. At Ortega Orthodontics we are happy to share that we will be serving as a sponsor of the upcoming Ortega River Run. We couldn’t be more excited to take part in this historic local event!

The 37th Annual Ortega River Run is taking place Saturday, February 28th, 2015. There will be a one-mile fun run beginning at 8 am and the five-mile run/walk beginning at 8:30 am. The races will both start and finish at St. Mark’s Episcopal Day School. Registration for this highly anticipated event is taking place now. This local tradition includes a historic course that takes participants over bridges and along streets lined with beautiful trees.

At Ortega Orthodontics we hope to see your smiling faces at the 37th Annual Ortega River Run for a wonderful Saturday morning event! Contact your Jacksonville orthodontist today to schedule a consultation about straightening your smile.